'Birds of America' and Audubon's legacy

How John James Audubon published 'Birds of America', and the artist's awareness of the need to preserve endangered species. 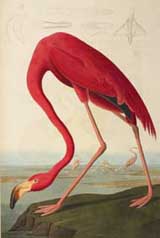 'Birds of America' is one of the world's most famous and valuable books. Its huge pages contain the life's work of John James Audubon, a Haitian-born Frenchman who became an American citizen.

Audubon was determined to have his paintings reproduced to the highest possible standards.

The first 10 copper plates were painstakingly engraved by William Home Lizars. A team of colourists then reproduced the details of the original painting on to the engraved print.

'Birds of America' was completed in 1838 after years of intensive work, first by Lizars in Edinburgh and then by Robert Havell of London.

The cost of publishing was nearly £29,000, and only around 200 complete sets were issued. Despite all the obstacles in his way, Audubon had produced one of the world's most magnificent books.

Some sets were later broken up and the individual plates sold. Complete sets have increased in value over the years, as was shown by the staggering $8.8 million price paid for one in 2000. There are three complete sets held in public institutions in Scotland.

Audubon was a keen observer of birds and nature. That didn't stop him shooting birds in order to paint them accurately. Sometimes he killed several before he found a perfect specimen.

However, the artist also had a deep concern for conservation. In his later writings he raised the alarm about the destruction of birds and other wildlife and their habitats.

Since 1880 six North American bird species are suspected or known to have become extinct. Among them are the Carolina parrot and the passenger pigeon, which in Audubon's day was the most abundant bird in North America.

In Audubon's honour, the National Audubon Society was set up in 1905 to promote conservation issues in the USA.