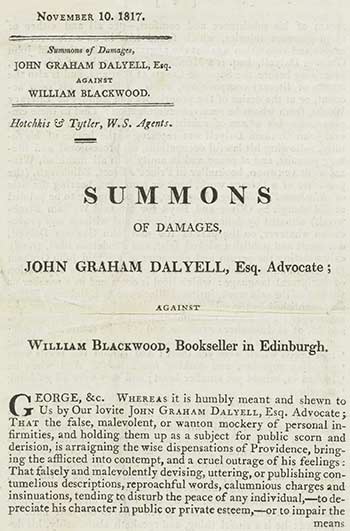 Summons of damages against
William Blackwood, 1817.

After 'Blackwood's Magazine' relaunched in October 1817, the magazine developed a reputation for scandal with its critical essays and reviews.

Sir Walter Scott reviewed Mary Shelley's 'Frankenstein' in 'Blackwood's', and raised concerns about its subject matter. His overall impression of the book was baffled bewilderment, and he wondered why it had to be written at all.

Alongside critical essays, the magazine became known for personal attacks on public figures, which triggered a number of lawsuits against the magazine.

In November 1817, John Graham Dalyell submitted a summons of damages against William Blackwood. The document accused Blackwood of 'wicked, false, calumnious and libellous publication' which rendered Dalyell's 'person, character and occupations […] the subject of ridicule, obloquy and reproach'.