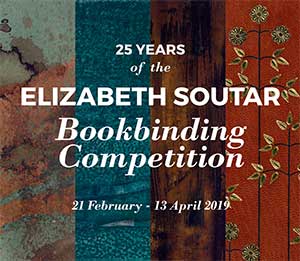 Decorative bookbindings were included in this display, celebrating 25 years of one of the most prestigious competitions in Europe.

Created from a range of materials, the bindings shown were the work of 25 past winners of the competition. Ran from 21 February to 13 April 2019.

Established by the Library in 1993, the Elizabeth Soutar Bookbinding Competition was generously sponsored by Mrs Elizabeth A Clark (formerly Soutar) of Moray in memory of her late parents.

Thanks to a bequest after her death in 2008, the competition has continued, with support from the Magnus and Janet Soutar Fund.

Initially only open to UK residents, the competition was extended in 1995 to allow European Union residents to enter. The awards have also expanded to include a student category and additional prizes for 'best craft' and 'best creative' bookbindings.

Entries are judged on the level of skill demonstrated as well as originality and expression. All award-winning bindings are donated to the Library's special and commissioned bindings collection.

Twenty-five bookbindings — one for each year of the competition — were displayed. Here are just some of the winning entries that were shown:

Visitors also saw the winning bookbindings from the 2018 competition, announced in a ceremony held at the Library on 21 February 2019.

You can also discover more about the Library's decorative bindings in the rare books collections.