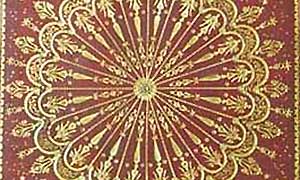 Before it became the practice for books to be issued with the publishers' covers, individual book-buyers were expected to arrange the binding of the printed pages themselves.

Consequently, there is a huge variety of early bindings, ranging from plain leather or paste boards to bindings with elaborate patterns tooled in gold.

Scotland has a unique tradition of decorative bookinding, and at the Library we have collected examples of this craft for many years.

Many bindings give useful information about the lives of former owners. For example, it was common to give a finely bound book as a wedding gift.

You can use our Digital gallery to view a gallery of selected Scottish bindings.

The range of the collection 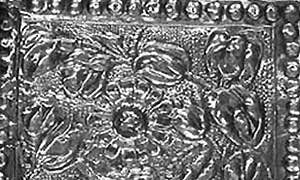 The National Library of Scotland's holdings range from the oldest known Scottish binding, on the Haye Manuscript (MS.Acc.9253), which dates from around 1480, to the work of present-day Scottish binders.

Particularly well-represented are the distinctively Scottish late 17th and 18th-century 'herring-bone' and 'wheel' styles. We continue to acquire these, along with more unusual bindings such as silk embroidered books and a book bound in silver. 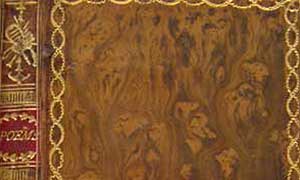 A binding by James Scott

We also hold numerous bindings in the late 18th-century style associated with the Edinburgh binders James Scott and his son William.

The definitive account by J H Loudon was researched at the Library, which holds by far the largest number of known Scott bindings.

Shown here is a Scott binding bought in 2003. 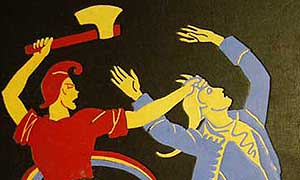 As well as examples of Scottish work at its best, we also collect bindings that are of interest as curiosities or that give information about the history of the book as an object.

These include a binding in coarse fur and a leather wrap-around cover designed for a travelling minister's Bible.

The collections also hold a wide variety of non-Scottish bindings, including many 15th- and 16th-century blind-stamped and panel bindings, early gold-tooled bindings.

These include two executed for the celebrated bibliophile Jean Grolier (1489/90-1565), and an example of a French fanfare binding for Mary Queen of Scots.

English fine bindings of the 1670s onwards are well represented, and armorial stamps have been extensively recorded. 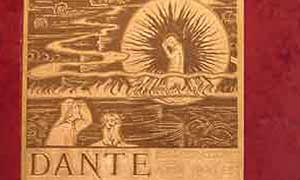 We have added bookbindings of the Arts and Crafts period to the collections to reflect the role of Scottish artists in the movement.

Among examples we have bought are bindings by Scottish illustrator and designer Jessie M King (1875-1949) and Phoebe Anna Traquair (1875-1936), a central figure in the Arts and Crafts movement in Scotland. 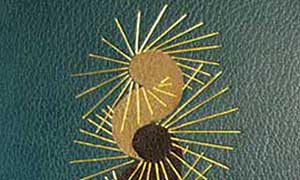 Thanks to the generous financial support of the late Elizabeth Soutar and from the Magnus and Janet Soutar Fund, we organise an annual bookbinding competition open to anyone resident in any of the member states of the European Union. There are two prizes — Best Competition Entrant and Best Student Entrant — and the winning entries are added to the Library's collections.

Research is supported by an extensive collection of reference works, and by files of rubbings, photographs and digital scans.

We maintain a record of Scott bindings not in Loudon's book, whether held by the Library or elsewhere.

Many of our fine bindings have been brought together in a special collection shelfmarked 'Bdg', and you can use the 'Browse by shelfmark' option on Library Search to find items in this collection. Other bindings remain scattered throughout our collections.

Our records are increasingly being upgraded to include information about the materials, design and provenance of decorative bindings, but so far most of our bindings are not fully described online. Anyone conducting extensive research into bindings is encouraged to email staff in Rare Book Collections.