The Duval and Hamilton partnership 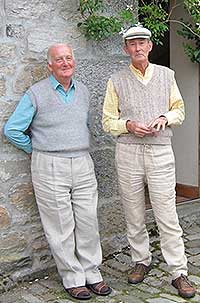 A display of books, manuscripts and personal items from the collection and archive of Kulgin Duval and Colin Hamilton.

Some of the most beautiful modern books ever exhibited in the National Library of Scotland went on show in 2017.

The 'Creative lives' display celebrated the extraordinary contribution of Kulgin Duval and Colin Hamilton to Scottish life and letters.

From an early beginning dealing in rare books and manuscripts, their partnership became the centre of many creative collaborations. They published fine editions of works by friends including Hugh MacDiarmid and George Mackay Brown.

And a keen interest in designer bindings for favourite volumes led to the commissioning of work of this kind on a remarkable scale.

Items and people in focus in the display included:

We are grateful to Colin Hamilton for the loan of many of the items that were on display in 'Creative lives'.

Undoubtedly the visual highlights of the display were the bindings. Among those on show were: