Voices from the archives 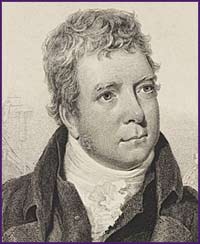 The story behind Walter Scott's first novel — a global bestseller — published 200 years ago. This display ran from 10 September to 16 November 2014.

The original manuscript of Walter Scott's ground-breaking novel 'Waverley' was at the heart of the National Library's autumn 'treasures' display.

'Waverley' was first published in 1814. It began a series of 28 novels from the acclaimed Scottish author who revolutionised fiction and invented the modern historical novel.

Scott and his contemporaries tell us, through books, letters and reviews, what lay behind the novel, how it was published and received — and why the author initially chose to remain anonymous. 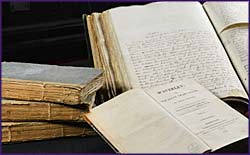 Alongside the 'Waverley' manuscript, we drew from the national collections some key documents that shed light on the birth of the novel, such as: 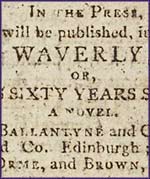 Adverts for the book 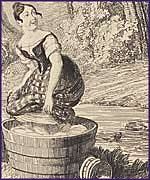 Burt's 'Letters from
a gentleman'

Books, letters and newspapers helped reveal the novel's journey into print, including:

Published works were some of the sources and inspirations behind the novel, such as:

The author of Waverley caused a stir by choosing to remain anonymous for 13 years, although speculation that the novel was from Scott's pen is evident in letters and reviews from this period. For instance:

Walter Scott at the National Library

The National Library of Scotland has one of the best collections of Scott material in the world. We hold many of Scott's own manuscripts and letters, his publishers' archives, and all kinds of editions and translations of his books.