Ernest Shackleton was born on 15 February 1874 in County Kildare, Ireland, the second of 10 children. His family moved to south east London in 1884, and Shackleton attended Dulwich College as a day boy.

He left school at the age of 16, and joined the merchant navy, which enabled him to travel widely. At the outbreak of the Boer War in 1899, he worked as third officer on a ship carrying troops from Southampton to the Cape. 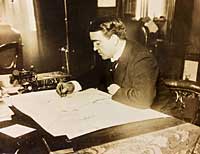 Photograph of Ernest
Shackleton at his desk.

Shackleton became a fellow of the Royal Geographical Society of London, and in 1901 he was chosen to go on an expedition to Antarctica led by Robert Falcon Scott.

During the expedition, Shackleton was in charge of the stores, and was later given responsibility for the catering on board the ship, 'Discovery'. He was also selected by Scott to take part in a sledging trek towards the South Pole. They reached as far south as 82º 17', and got closer to the Pole than anyone before them. The expedition party were forced to turn back because of severe conditions, terrain, and the onset of scurvy. Shackleton suffered from heart and lung conditions, and was invalided home.

Shackleton married Emily Mary Dorman in April 1904, and in the same year he was appointed Secretary of the Royal Scottish Geographical Society in Edinburgh. He lived at 14 South Learmonth Gardens, Edinburgh, until 1910.

In 1906, he unsuccessfully stood as a Member of Parliament in Dundee, and he later worked for William Beardmore as Secretary of the technical committee of Beardmore's engineering works at Parkhead, Glasgow — a firm of naval ship builders and one of the largest employers in the Glasgow area at the time. Beardmore became a chief supporter of Shackleton's Nimrod expedition, and the Beardmore Glacier in Antarctica is named after him.

Shackleton set sail for the Antarctic again in 1907, with the aim of being the first to reach the South Pole. Although this was not achieved, the expedition members made the first ascent of Mount Erebus, reached the location of the magnetic South Pole, and were the first to set foot on the South Polar Plateau.

During this expedition, Shackleton acquired the nickname 'the Boss' due to his leadership qualities. He received a hero's welcome when he returned home, and was knighted by King Edward VII.

Amundsen reached the South Pole in 1911, followed by Scott. Shackleton decided to tackle the one great journey that remained — crossing the Antarctic continent. He announced the Imperial Trans-Antarctic expedition in December 1913, and the 'Endurance' set sail in August 1914.

By mid-January 1915, the ship was stuck fast in the pack ice in the Weddell Sea. After 10 months, the ship began to break up and the men were forced to camp on an ice floe for six months. When the ice floe began to break, the expedition team left for Elephant Island in three small lifeboats — the 'Stancomb-Wills', the 'Dudley Docker', and the 'James Caird'.

Elephant Island was a long way from any shipping routes, and so Shackleton and five other men embarked on an 800-mile voyage to South Georgia in the 'James Caird', a 22-foot boat. They were at sea in treacherous conditions for 16 days before reaching land. Shackleton and two of his men then had to traverse the unclimbed and unsurveyed Allardyce Range to reach Stromness Whaling Station where they were able to get help.

The men left stranded on Elephant Island were rescued on 30 August 1916 after 105 days. The Ross Sea Party, who had been laying depots for the Shackleton expedition from the other side of the continent, were relieved in October 1916.

Shackleton returned to Britain in the midst of the First World War. He volunteered for the army and, although he did not see active service at the Front, he carried out various missions in South America and Russia.

In 1921, Shackleton sailed once again for Antarctica in the 'Quest' with the aim of circumnavigating the continent by sea. However, he died suddenly of a heart attack on 5 January 1922, and was buried at the Norwegian Cemetery at Grytviken, South Georgia.