More items for
Shackleton and
Wordie:

'You have got to surround your expedition with a scientific halo. It gets you money and official support and the countenance of the learned societies'.
— From 'The Turnstile' written by A E W Mason.

Scientific work and research wasn't on Ernest Shackleton's list of priorities for his expedition. However, he recognised the wisdom of Mason's words that scientific endeavour was a necessary element in order to receive funding. Shackleton also knew it was important to get official backing from bodies like the Royal Geographical Society and so reluctantly, agreed to take along a party of scientists. 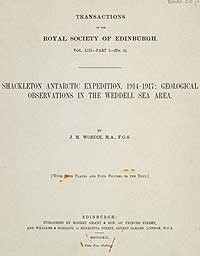 Unlike Scott, Shackleton didn't have a natural affiliation with scientists. Not suprisingly therefore, he showed little interest in conducting extensive interviews to select them for his expedition.

Shackleton had initially wanted Priestley and another geologist and Terra Nova survivor, Frank Debenham to make up his geological team but both turned the position down. For the 25 year old Wordie, the expedition presented an exciting opportunity for adventure and geological work and so called on some influential friends for help.However, it was Priestley's timely recommendation that helped secure his place.

Wordie was one of 5,000 hopefuls whose applications were put into one of three piles labelled 'Mad', 'Hopeless' or 'Possible'. His application (along with the recommendation) was helped by the fact that Shackleton had virtually no scientific resources at that point.

Although Shackleton acknowledged scientists were essential to his expedition, he waited until a month before the party was due to sail before confirming Wordie as the only geologist of the Weddell Sea party.

A matter of survival

Making its way towards towards the Weddell Sea, the Endurance made slow progress and finding much heavier pack ice than expected, the ship became stuck.

The Endurance steamed along the barrier for a few days, discovering and naming the Caird Coast. However, they made slow progress and on 19 January 1915 at 76°34'S the ship became trapped in consolidated pack ice which had closed in around it during the night.

While they managed to live fairly comfortably during what must have seemed like an eternity by that point, the pressure from the ice was slowly crushing the ship. By the end of September, cracks started to appear on the ship and finally on 27 October the Endurance was damaged beyond repair when the stern was crushed. The men would now have to abandon the Endurance, a devastating blow.

Shackleton ordered the lifeboats 'Dudley Docker', 'Stancomb Wills' and 'James Caird', the gear, provisions and sledges lowered to the ice floe where they would be forced to establish a camp of sorts on the pack ice. They named this 'Ocean Camp' though it only offered a flimsy sense of security as the Weddell Sea lay under their feet.

Having finally made a decision to take their fate into their own hands rather than wait for a northerly drift, on 9 April 1916 the lifeboats sailed towards Elephant Island in the outer reaches of the South Shetland islands. They finally arrived their five days later on 15 April.

It was the first time they had stood on solid ground for 497 days. Shackleton and five of the men then embarked on one of the most perilous yet most celebrated achievements of maritime navigation ever undertaken.

Sailing in an open top lifeboat called the 'James Caird' they crossed 720 nautical miles of the South Atlantic seas to reach the whaling station at South Georgia.

Every day since the 'Caird's departure, the men would scan the horizon with the hope of seeing a rescue ship. Wordie had started out hoping it would come within a month but he knew that the ice conditions were crucial. He came to the conclusion that they would be doomed to wait until spring.

On 5 June 1916, a week after he had anticipated Shackleton's return, he wrote in his journal:

'Still no relief. We conclude that the Boss has been down and finding close pack has returned. At that rate we can hardly expect a ship before August.'

'Depths and
deposits of the
Weddell Sea'.
View zoomable
image

On 30 August, after almost four and a half months on Elephant Island and several rescue attempts thwarted by the pack ice, the 22 men were finally rescued by the 'Yelcho'. Frustrated by the delay in getting a ship to arrive from Britian, Shackleton asked a Chilean naval commander to release the 'Yelcho' for the rescue attempt and they generously agreed.

Appearing to the ecstatic delight of the 22 marooned men, Shackleton didn't take any time to linger on Elephant Island in case the pack ice would once again take hold. He urged the men quickly onto the ship.

'The end was rather a hurry: none of our rescuers ever saw the hut; the weather seemed changing for the worse; it was best to cut and run. And so all my beach exotics are left behind; the only rocks I have are in situ; But can one complain? My notes are safe and every man is safe.'