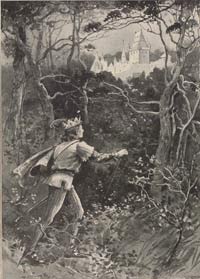 Example of a fairy tale 'hero'.

Most fairy tales feature at least one hero. Heroes can be male or female, rich or poor, children or adults.

This illustration is from 'Little snow white and other fairy stories' from about 1898. Download hero illustration (PDF: 2.09 MB; 1 page).

The hero is usually faced with a problem which has to be solved. This may involve going on a journey, solving a riddle or puzzle, or undertaking a difficult task or impossible test.

The hero often has to face danger and difficulties, but wins through in the end.

The hero often has to defeat or capture the villain in the story in order to survive.

Sometimes the hero has to rescue someone else who is in trouble or danger, as for example the sister in 'The six swans'. At other times, the hero has to save himself or herself, for instance Hansel and Gretel who manage to escape from the witch who lives in the gingerbread house.

What makes a hero?

The hero is often described as:

The hero does what needs to be done, even though it might be difficult or challenging. The hero may be reluctant or fearful about going on a journey or taking on a task, but does it anyway.

The hero doesn't usually have magic powers, but sometimes he or she has access to magic helpers or objects. At other times, the hero has to rely on outwitting his or her enemy.