The Fenwick Weavers' Society is considered to be the earliest known co-operative in the world for which full records exist. 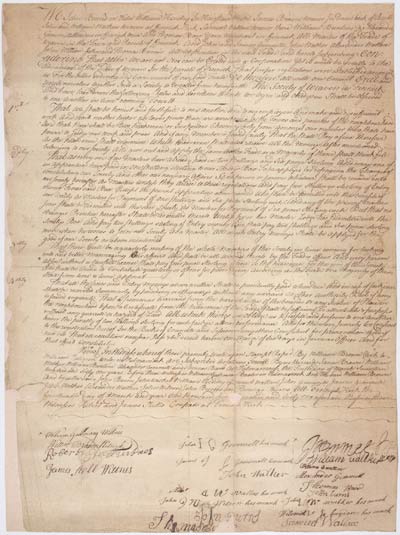 The foundation charter shown here is dated 14 March 1761. It is now part of the collection at the National Library of Scotland.

In the mid-18th century, a group of weavers in Fenwick, Ayrshire, decided to form a society to:

This was a period of rapid change in the textile industry, and there was increased pressure from agents and manufacturers to lower the prices paid for the work produced. Inspectors were employed to check the quality of work and the prices asked, and it could be disastrous for a village to gain a bad reputation for quality or late delivery.

At this time, the idea of workers forming mutual societies was considered dangerous as it threatened the existing social order. The Fenwick weavers signed their foundation charter in the local church, which was considered a place of safety and sanctuary.

On 14 March 1761, 16 weavers met together in Fenwick Church to sign the foundation charter of the Fenwick Weavers' Society. By signing the document, they agreed to its terms and conditions. These included 'being honest and faithful to one another' and to their employers, making 'good sufficient' work, and setting prices that were 'neither higher nor lower ... than are accustomed in the towns and parishes of the neighbourhood'.

The society members promised to pay an admission fee of two shillings and sixpence which was to be used for the good of the Society. Regular contributions to the poor fund were made from these shared investments.

For the social good

As well as offering mutual support to its members, the society aimed to bring benefit to the wider community.

On 9 November 1769, the society agreed that its funds should be used to buy, 'victuals', or food, in bulk to be sold to members and non-members at a good price. In addition, members enjoyed the privilege of up to four weeks' credit.

The society funds were also used to buy books and, in 1808, the members established a library for the local community.

In the society records, there is also evidence of a form of 'credit union', or community-based bank organised on co-operative principles. People could borrow money from the communal funds at a fixed rate of interest.

Expansion of the co-operative movement

In the first two decades of the 19th century, several other towns and villages in Ayrshire established their own workers' co-operatives.

The Fenwick Weavers' Society was in existence until 1873 by which time the population of Fenwick had fallen from 2,000 inhabitants to only 500.

Today, the co-operative movement has hundreds of millions of members across the world, and is at the forefront of championing Fairtrade and sustainable farming methods

Timeline by Co-operative Development Scotland showing the history of the co-operative movement in Scotland.

Find out more about labour history at the Library

We have the leading collection of research material relating to Scottish labour and trade union history.

Visit the Moving Image Archive catalogue to find films relating to Scottish industry from fishing and tweed-making to mining and agriculture.