Detail from a 1738 Edinburgh funeral invitation.

Death is often called the 'last great taboo' but it wasn't always so. Items from the Library's general and Official Publications collections demonstrate the shift in cultural and social attitudes to death.

The ancient Egyptians and Chinese are well known for burying their dead in chambers furnished with figurines, furniture and art. The author of 'Mourning', Nicolas Penny writes that these objects were presents for the dead. 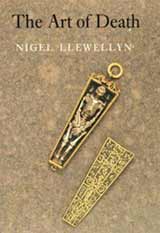 This custom still occurs in the form of funeral wreaths, despite knowing the dead will not use these. It may satisfy a need in the bereaved to give or make a sacrifice.

'The art of death' by Nigel Llewellyn shows a tiny skeleton in a coffin on the cover. The author considers that death is four things:

He explores the ritual responses to death which developed from the 16th-18th centuries. Often these were accompanied by a range of visual artefacts. 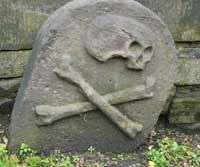 Skull and crossbones on grave.

Skulls and skeletons — 'momento mori' — which featured on spoons, woodcuts and gravestones remind the living of their own mortality. They help prepare their spirit for death.

The image of death also appeared on mourning jewellery in the form of enamelled skulls with diamonds for eyes. These and other tokens, often containing hair of the deceased, gave some comfort to the bereaved that death was part of some great design.

Today, the death skull is still embedded in our lives and worn on the body. These are often worn as rings and earrings and printed on accessories such as scarves.

In Britain, attitudes to death began to change from around 1830 as Pat Jalland explains in 'Death in the Victorian family'.

The Victorian 'good death' was modelled from evangelical beliefs of being with family and making peace with God.

In the mid-19th century death was too frequent and familiar to be denied. As a result, Victorians encouraged close proximity to the dying.

A slow death from, for example, tuberculosis, was romanticised. It gave ample time for spiritual reconciliation and for the production of deathbed drawings and memoirs.

Changing attitudes to death and dying

However, from around 1870 attitudes began to change as mortality rates declined and life expectancies rose. As Christian piety waned, people also developed a new understanding of disease. There was more concern about having a pain-free, quick death, rather than preparing the soul. 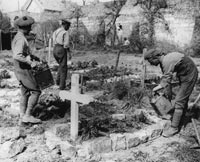 Yet it was the First World War which truly dismantled the Victorian dying and mourning rituals.

The enormous loss of life touched millions. The trauma of dying violently far away from family, and the ensuing mass grief couldn't be further removed from the comforting image of the 'good death'.

In addition, the influenza pandemic of 1918-1919 caused more mass deaths and burials, as the 'Report on the mortality from influenza in Scotland' illustrates. It is thought that the so-called 'Spanish flu' caused around 50 million deaths worldwide.

Medical failure vs a natural end

After the Second World War an interest in death was regarded as morbid. The dying and deceased moved from the family home to the hospital and undertakers. Bodies of the deceased were now tended to by professionals.

Death provoked embarrassment and uncertainty, and grew increasingly taboo. With tremendous medical advances in the mid-20th century, death was viewed as a medical failure rather than a natural end.

However, in 1969 Elizabeth Kübler-Ross's book 'On death and dying', featuring its five stages of grief, openly explored the emotions of the 20th-century experience of death.

The Shipman Inquiry prompted a review of the coroner's system and medical death certification after Dr Harold Shipman was found guilty of murdering patients in 2000.

This, together with the 'NHS care and respect in death' book, illustrates changes in policy for health professionals in recent times. The new 'When someone dies' booklet is aimed at younger people and raises awareness of the physical and emotional effects of grief.

Perhaps we are at a turning point where a 'good death' is being redefined for the 21st century.

Items relating to death and dying in our collections

The Library shelfmark for a particular title is given in square brackets at the end of each entry.

Other related items from the Official Publications collection