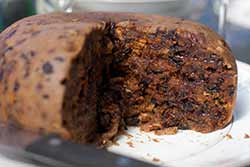 As Christmas approaches, we celebrate premium foods as part of the Year of Food and Drink Scotland.

Traditionally, Scots celebrate Hogmanay more than Christmas. However, by the 19th century most families enjoyed an extravagant Christmas meal. For the wealthy, the festive menu included a rich plum pudding.

For most Britons today, Christmas dinner would not be complete without plum pudding.

Recipe of the month from the Library's collections: 'Plumb pudding'

Plum pudding is the term used for a rich boiled or baked pudding made with raisins, currants or other dried fruits.

Early boiled puddings were usually savoury mixtures of meat, suet and oatmeal cooked in animal guts. The introduction of cloth pudding bags for cooking led to a greater variety of puddings and sweet puddings became popular.

This 'Plumb Pudding' is from Stephana Malcolm's recipe book, begun in 1791 at Burnfoot House. The raisins and currants are held together with suet, flour, eggs and milk and this rich mixture was sweetened, spiced, and fortified with a large glass of brandy.

'To make a Plumb Pudding'

A lb of jar raisins [see note], a lb of Currants, a lb of beef Suett, two Eggs, a lb of flour, or between three and four handfuls if you want it rich, a large Glass full of Brandy, two large afternoon tea cups full of milk, two table spoonfuls of sugar, a little nutmeg, mix all well together tie it up close, and boil it five hours.

Note: 'A lb' (one pound) is approximately 454 grams. 'Jar raisins' were just raisins stored in a jar.