The National Library of Scotland's United States collections cover a wide range of topics, from the Civil War to the Cold War, Dixie to Dadaism, and Modernism to Motown.

Our American collections are the largest of the international collections, with material dating from the 17th century to the present day. Within the collections are rare books, manuscripts, periodicals, maps, microforms, and numerous recent publications. 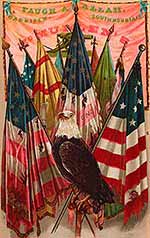 In these collections you will find a range of topics represented, spanning centuries of history and a wide variety of disciplines. Among many others, subjects covered include:

Scotland and the USA

Collecting is especially focused on material about Scotland and the Scots, with relevance to Scotland, or written by important Scots. The United States collections contain material about:

Photograph
of a slave

The United States collections contain many treasures, including:

Email Dora Petherbridge, United States and Commonwealth Collections Curator, with enquiries, suggestions for acquisition, and if you wish to donate material.

Ask a question online if you have an enquiry about manuscripts relating to the United States.

In 2012, a small display of treasures from our collections marked the role of the American Revolution in the founding of the USA. See and read about some of the key exhibits used to tell the story

In 2015, echoes of Union and Confederate voices resonated in a display commemorating the American Civil War