Ordnance Survey digital maps of the United Kingdom, 1998 to the present

One important feature of this customised web application is that it lets you view two different years side by side to compare change, as this image shows: 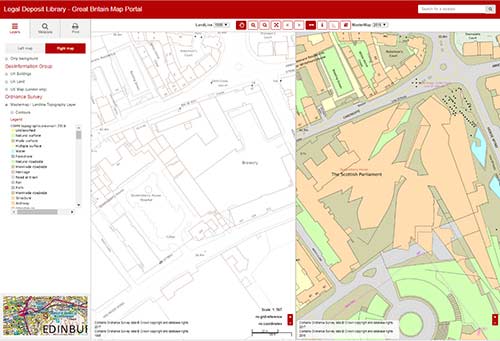 The changing face of Holyrood, Edinburgh.

Our Modern Map Viewer is available at the National Library of Scotland within the Maps Reading Room, the General Reading Room, and at Kelvin Hall.

The map data provides comprehensive coverage of the whole United Kingdom at the largest, most detailed scales available:

You can search an area in three ways:

As well as comparing two maps side by side, you can:

From 1998-2005, we received the OS Land-Line data format, which is based on tiles (squares of varying extent). From 2006, we have received the OS MasterMap data format, which is based on features (buildings, roads, railways, etc.). These features have date information recorded for them, allowing a more specific record of landscape change, and they can also be coloured to create a more intuitive and clearer map.

OS MasterMap includes the Topography and Integrated Transport Network layers, but not the Address or Imagery (aerial photography) layers. You will find further information on OS MasterMap on the OS website.

However, the LandForm PROFILE dataset, from 1998-2014, and OS Terrain 5 from 2015, are included with contour lines surveyed at 1:10,000 scale, and associated height information.

We can supply colour printouts at A4 size (on an A3 sheet of paper) for private or non-commercial purposes. You can have up to four copies of the same map extract. See Ordnance Survey's copying information page for more details.

OS MasterMap has been developed in collaboration with the five other legal deposit libraries in the United Kingdom, who share the same software and map data.

From 2017, the viewer for the data has been enhanced to allow the inclusion of other digital map publications received under non-print legal deposit legislation.