Children's books in the National Library of Scotland

The National Library of Scotland has substantial holdings of children's books, acquired by purchase, donation and in the main through legal deposit.

Children's books in Scotland before 1700

The Library's holdings of early Scottish children's books, mainly primers and catechisms, for the period prior to the introduction of copyright legislation is somewhat patchy.

The first book for children printed in Scotland was possibly a grace book — a small first reading book which included the graces, to be used before and after meals, and the Ten Commandments.

This was mentioned in an ordinance issued by the Town Council of the Burgh of Edinburgh in January 1519. Unfortunately there is no trace of this publication.

A small number of early books for children did come into the possession of the Advocates Library, the forerunner to the National Library, founded in 1689.

These include 'Parvus catechismus', attributed to Robert Pont, which was printed in St Andrews in 1573, and Jean Despautère's 'Grammar' [National Library shelfmark: H.1.d.26] — no less than seven editions of which were published in Scotland between 1579 and 1684.

A unique and fascinating item is that by the Dunfermline poet and schoolmaster Robert Henryson — 'The morall fabillis of Esope', printed in Edinburgh in 1571. This is a translation into 'Scottis meter' of 'Aesop's fables' [Shelfmark: F.5.b.480]. The fables are set in an unusual French 'civilité' type, while the morals are in roman type.

There are a number of special collections here in which children's books — many of which are unique — can be found.

Hornbooks — sheets with the alphabet, numbers and occasionally prayers pasted on to wood and sometimes covered with a veneer of cattle horn — were produced in Scotland as early as 1588.

The Library holds two from the 1620s printed by Edward Raban, who was the first printer in Aberdeen. These unmounted sheets come from part of the Rosebery Collection, presented to the Library in 1927 by Archibald Primrose, 5th Earl of Rosebery, a renowned book collector and former Prime Minister.

One of them originally belonged to George Lockhart of Carnwath, author, politician and a firm opponent of the Union with England. It later formed part of the library of David Laing, the Scottish antiquary and secretary of the Bannatyne Club. 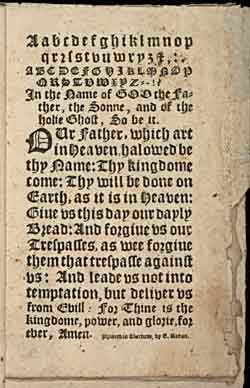 It was described in a sale catalogue of 1890 'as probably the earliest monument of the kind in existence' and 'the most curious article in the Laing Collection'.

Another curious item in the Rosebery Collection is 'Tom Thumb'(Edinburgh, 1682) [Shelfmark: Ry.III.h.6], a verse edition of the prose tale of this enduringly popular folk-tale hero, who made his first appearance in a 1621 London publication.

There are a number of special collections in the National Library that contain children's literature: 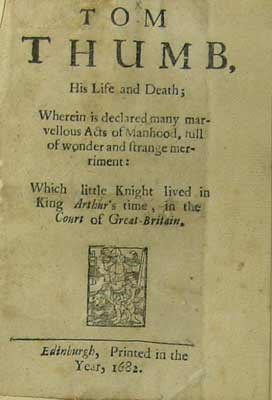 This collection was built up by John Fairley who was an assiduous collector of chapbooks and print ephemera. He was a family friend of an Edinburgh businessman William Robert Reid, and these chapbooks were incorporated into the bequest of the Reid family and received by the newly established National Library in 1926.

The Hugh Sharp Collection — the private library of a Fife businessman and son of a Dundee jute manufacturer — contains many first editions of the classics of English and American literature.

Included is a copy of the suppressed first edition of 'Alice's Adventures in Wonderland' (1865) — withdrawn as the illustrator, John Tenniel, was not satisfied with the way in which his illustrations had been reproduced.

Sharp was clearly something of a Carroll devotee: there are also first editions of 'Alice' in French and German and presentation copies from Carroll of 'Alice's adventures underground' and 'The Hunting of the Snark' [Shelfmark: H.S.262]. This contains a letter [Library reference: MS.10287] and verse dedicated to Marion Bessie Terry, younger sister of the actress Ellen Terry.

There are also a number of other gems of children's literature:

The National Library holds three collections of children's books which have been acquired by donation and purchase through the years. These are the J G Scott, School Prize and Eudo Mason Collections: 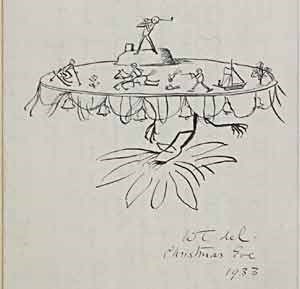 The J G Scott Collection was donated to the Library by Miss Judith G Scott in 1984.

Although it is quite small — only 35 volumes — it contains a representative cross-section of children's books from the 18th and, primarily, the 19th centuries.

There are two notable 18th-century items: the first is the 30th edition of Benjamin Keach's 'Instructions for children' printed in 1763 — only two other copies are recorded on the English Short Title Catalogue (ESTC). 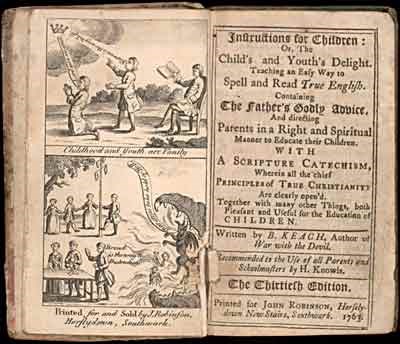 When this was first published in 1664 as 'The child's instructor' [Shelfmark: J.G.S.8], the author — a Baptist minister — was arrested and pilloried for his views on baptism.

The other is the 1795 edition of 'Mother Bunch's fairy tales' published by Newbery — the only other known copy is at the Pierpoint Morgan Library in New York. 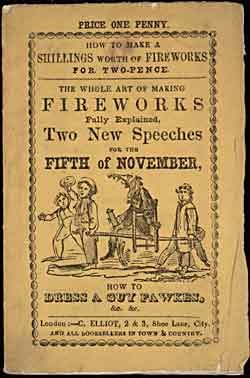 Cover of 'The whole art of
making fireworks fully explained'

The School Prize Collection, which comprises over 650 books, originated in a small group of school prize books presented by Ian Grant of John Grant, Booksellers, of Edinburgh in 1964. It has since been built up by donation and purchase.

The schools were mainly, though not exclusively, Scottish and the books were awarded as prizes from 1775 to 1956. Most of the books were given as prizes in the late 19th century: authors such as Henty, Ballantyne, Scott, Oliphant and Stevenson feature prominently.

There are biographies of Scottish role-models — such as David Livingstone, Mungo Park, William Wallace, Mary Queen of Scots, Bonnie Prince Charlie, the missionary Robert Moffat — and works in French and Latin for the more studious.

For the bibliographer as well as the children's book historian there is much of interest in this collection, including book bindings, with bookseller's labels, binder's tickets and colour bookplates much in evidence.

One book in particular to mention is 'A father's legacy to his daughters' [Shelfmark: SP.508], published in Worcester, Massachusetts, probably in 1795.

The author, John Gregory, studied in Edinburgh and Leyden, practised medicine in Aberdeen and in 1766 was appointed physician to the King (George III) in Scotland. The only other copy of this book traced belongs to the American Antiquarian Society. This book was presented to one Eliza Williamson, a pupil of Elizabeth Town Academy, in the US in 1802.

The Library also holds the Oliver & Boyd Collection. This consists of the file copies of the publications of this prominent Edinburgh publisher, deposited in 1978 at the same time as the first portion of their publishing records came to the Library's Manuscript Collections division.

There are over 2,000 items, mainly school textbooks from the 20th century.

The largest collection of children's books held is the Eudo Mason Collection.

Eudo Mason (1901-1969), born in Colchester, was for many years Professor of German at the University of Edinburgh. He wrote extensively on Rainer Maria Rilke and German Romantic literature and was awarded the Goethe Institut's highest award, their gold medal, in 1967.

Mason was clearly knowledgeable about children's books. Many of the items in his collection have slips pasted in with notes about the illustrators, authors or publishers and references to the catalogue of the Osborne Collection in Toronto and the Gumuchian sale catalogue. It also includes his own set of secondary sources, including booksellers' and auction catalogues.

The collection was presented to the Library by his executors in 1969. It consists of over 3,600 items in English, French and German, primarily from the 19th century, and reflects the reading material of children during the period when the market for children's literature mushroomed.

Not only does it contain books, but there are also jigsaw puzzles, scrapbooks, card games, Christmas cards, a peep show and a toy theatre.

All of the major names in the children's book world in Britain from the late 18th to the mid-20th century are represented:

There are chapbooks, toy books and annuals and there are some books which are of considerable interest and which are the only recorded copies.

These include 'Cendrillon', published by Benjamin Tabart around 1804, and the 1790 Edinburgh edition of 'Description of above three hundred animals' [Shelfmark: Mas.173] by Thomas Boreman, who is regarded as the first publisher and bookseller for children.

Professor Mason had a particular interest in the writings of Roland Quiz, the pseudonym of Richard Quittenton, (1833-1914).

Quittenton wrote the 'Tim Pippin' stories for 'Our Young Folks Weekly Budget', which began publication in 1870 and which subsequently was called 'Young Folks'. These stories later appeared in 'Books for the Bairns' of which there is an almost complete set in the collection.

From the 1860s Quittenton was joint editor of 'Weekly Budget' — the 'News of the World' of its time — writing humorous sketches, rhymes and stories for children, as well as 'blood and thunder' type material for older readers.

Accounts of the adventures of 'Tim Pippin in Giantland' [Shelfmark: Mas.731], with illustrations by Puck, the pseudonym of John Proctor, boosted the circulation of 'Our Young Folks Weekly Budget' by leaps and bounds. Later Proctor penned the 'Jack the Valiant' stories for the same paper.

Mason wrote a number of articles about these stories and their author in the 'Collectors' Digest Annual' in the 1960s under the pseudonym 'Otto Maurer'. 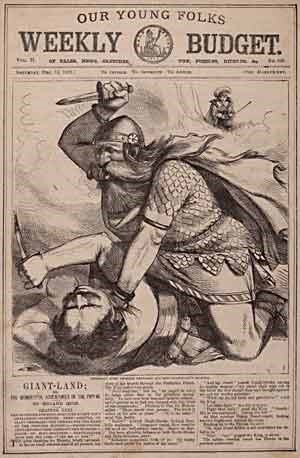 Illustration of Tim Pippin, from
'Our Young Folks Weekly Budget'.

The collection has also issues of 'Nuggets' — which contains a continuation of the Tim Pippin stories — and long runs of cheap serial publications which were published weekly such as:

Here is a colour plate from the penny weekly school story ' The Lambs of Littlecote', [Shelfmark: Mas.461] published in 39 parts in the 1890s, which is typical of this genre of publication. 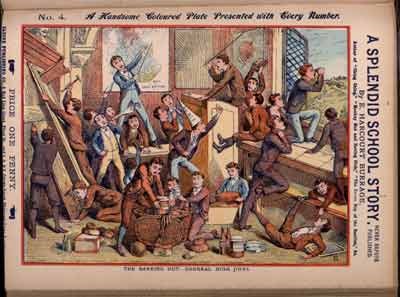 Colour plate from 'The Lambs of Littlecote'.

Perhaps reflecting Mason's interest in continental literature, there is also a representative sample of French, Dutch and in particular German children's books.

An examination of the collection suggests that Professor Mason was interested in two areas — cheap or popular printing and illustrations.

An example of the former is 'Nick Carter's asylum case', part of 'Nick Carter — le grand détective Américain' [Shelfmark: Mas.995(11)], a series printed monthly in Brussels. There are also parts from the French edition of 'Books for the Bairns — Collection Stead' and a similar French series — 'Les livres roses pour la jeunesse'.

Aiming at a different market perhaps were the picture broadsides or colour prints known in Germany as 'Münchener Bilderbogen' described by Bettina Hurlimann as 'the cheapest intellectual sustenance for children of every age'. They did not ever take off in Britain to anywhere near the same extent as on the continent. 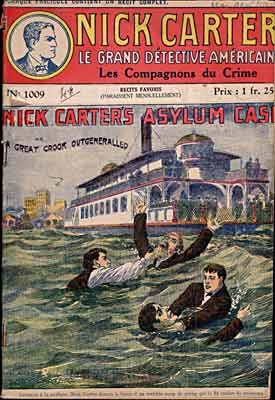 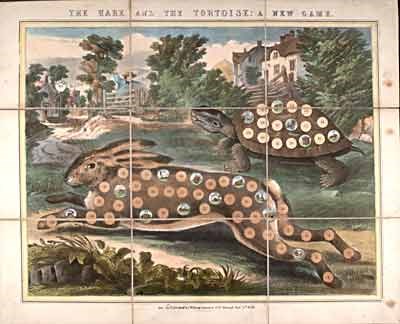 'The hare and the tortoise' board game. 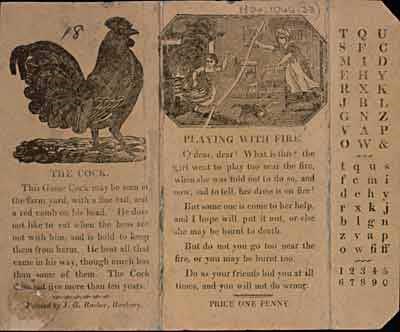 A battledore (racket game) from the Mason collection.

There is a considerable amount of non-book material in the Mason collection.

Open a box and you will come across single loose illustrations (origin unknown):

From Germany comes 'Richter's anchor box' (1880) [Shelfmark: Mas.1060(23)] — a set of building blocks, moulded from a type of cement and made in three colours and various shapes which could easily be built into architectural forms. 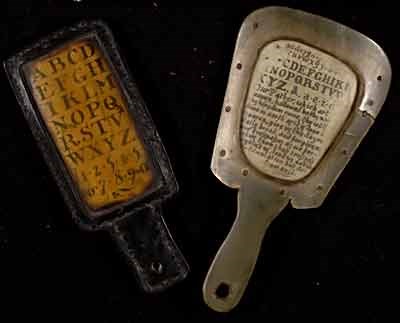 Hornbooks from the Eudo Mason collection. 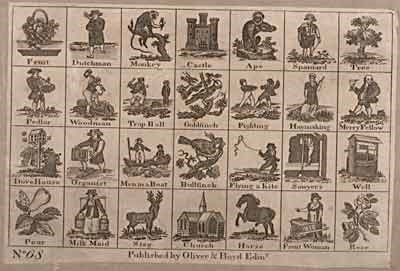 More educational works contained throughout the collection include a couple of hornbooks [Shelfmark: Mas.1060(6-7)], and the massive Adams 'illustrated panorama of history' published by A H Walker in New York in 1878, which is over 20 feet long.

There is a shelf-full of scrapbooks apparently containing random illustrations pasted in. However on closer inspection there is some fascinating ephemeral material waiting to be discovered and evaluated.

There are a number of examples of children's pictorial sheets [Shelfmark: Mas.1072], known popularly as 'lotteries' or 'dabbities', dating from the very early 19th century.

Apparently they were produced by chapbook publishers such as James Lumsden of Glasgow. They were available plain or coloured and were used in a children's game.

The pictures were cut out and placed separately between the pages of a book. Tickets were then sold to the child's playmates and the lottery drawn by opening the book at the page corresponding to the number on the ticket.

The Library continues to acquire children's books. The criteria we apply for acquiring them is the same as for other material.

We actively purchase children's books by Scottish authors, illustrated or bound by Scots or with Scottish imprints or stories with a Scottish setting.