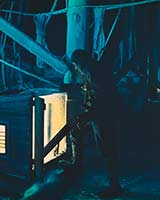 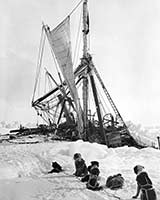 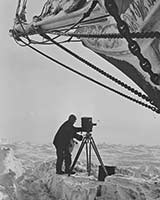 Hurley on the ice. 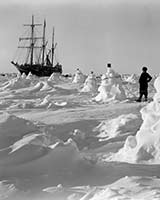 Trapped in the ice.

Frank Hurley (1885-1962) was the Endurance Expedition's official photographer. He saved many fragile photographic negatives from the water, which documented the expedition, under the most extreme circumstances.

The negatives were heavy, and he carefully selected those he would take back with him, smashing the rest on the ice.

Born in Australia, Hurley had a remarkable life. He spent more than four years in Antarctica in total, first as official photographer on Douglas Mawson's Australasian Antarctic Expedition from 1911 to 1914.

From 1914 to 1917, Hurley photographed Shackleton's Imperial Trans-Antarctic Expedition, and was marooned on the ice with the rest of the 'Endurance' crew.

After rescue from the ice, Hurley became a war photographer in both World Wars, capturing many stunning battlefield scenes and risking his life to document the conflict.

Hurley's fascination with capturing images extended to moving pictures, and he is also known for filming Antarctic expeditions, war zones and the building of Sydney Harbour Bridge, along with making many documentary and feature films.

To mark the centenary of the Endurance Expedition, the Royal Geographical Society (with IBG) digitised Hurley's original photographic negatives for the first time.

As one of the first truly modern documentary photographers and film-makers, Hurley hoped to have his images seen at as large scale size as possible. This intention is honoured in 'Enduring Eye' with giant dimension prints, some over two metres in width and height.

The resulting images — more than 90 in total — provide a lasting record of the men of the doomed expedition and their story.

Frank Hurley's photographs were on show in the 'Enduring Eye' exhibition, which ran at the Library from 16 June to 12 November 2017.