The Antarctic legacy of Sir Ernest Shackleton and Frank Hurley

'Enduring Eye' showcased Frank Hurley's photographs of Sir Ernest Shackleton and the men of the 'Endurance Expedition' of 1914-1917, alongside items from the Library's polar collections. 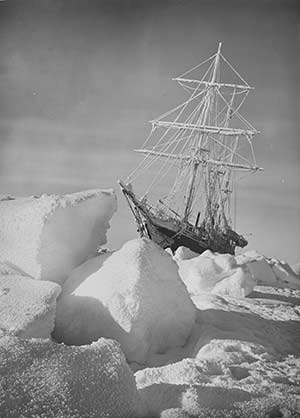 The 'Endurance' trapped in the ice.
Photograph by Frank Hurley,
© RGS (with IBG).

Items from the National Library of Scotland's polar collections are on display alongside the Royal Geographical Society (with IBG)'s 'Enduring Eye' exhibition.

'Enduring Eye' showcases newly-digitised images of the Endurance crew's epic struggle for survival in the Antarctic, both before and after their ship was destroyed. Taken by Frank Hurley, Shackleton's official expedition photographer, more than 90 images form one of the greatest ever photographic records of human survival.

Visitors can view Library collection items relating to Antarctic exploration and the expedition, such as letters, newspaper clippings and other ephemera. This includes:

The exhibition was researched, written and curated for the Royal Geographical Society (with IBG) by Meredith Hooper, with additional items contributed from the Library's polar collections. 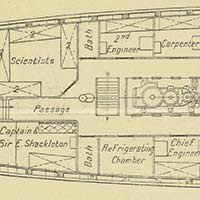 Detail from a plan
of the 'Endurance'.

The Imperial Trans-Antarctic Expedition, known as the 'Endurance Expedition', attempted to cross Antarctica by land via the South Pole. The expedition used two ships: the Endurance and the Aurora, with 28 men on each ship.

Looking for a landing in the Weddell Sea, the Endurance became trapped in ice, stranding its crew and beginning an epic struggle for survival and rescue.

Read more about the Endurance Expedition. 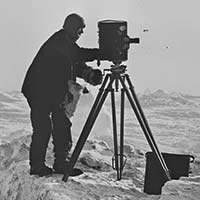 Frank Hurley's photographs documented the expedition under the most extreme circumstances, providing a lasting record of the men of the Endurance and their story. The Royal Geographical Society (with the Institute of British Geographers) has digitised Hurley's original photographic negatives, revealing previously unseen details of the crew's epic struggle for survival. 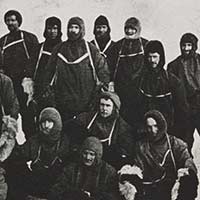 The Endurance Expedition staff included two surgeons, a geologist, a biologist, an artist and a photographer. Several of the team were Scots or had Scottish connections.

'Enduring Eye' explores the experiences of the men, their knowledge of Antarctica, and their connection with Scotland.

Read more about the expedition team and Scotland.

The Library is the only Scottish venue on the Heritage Lottery Fund-supported UK tour of RGS's 'Enduring Eye'. Visitors to the exhibition at the Library can see highlights including:

Tour the complete 'Enduring Eye' exhibition, as displayed at the Royal Geographical Society (with IBG):

Exhibitions at the Library