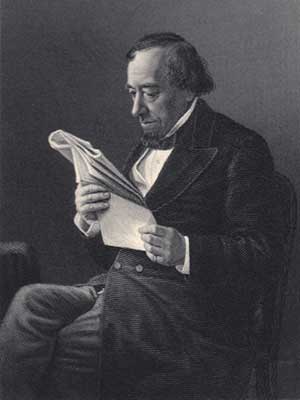 Benjamin Disraeli was a Tory politician and Britain's first and only Jewish Prime Minister (1868 and 1874-1876). His Government introduced many important health and education reforms, as well as extending the vote.

He also played an important role in the creation of the modern Conservative Party and was a particular favourite of Queen Victoria.

Before going into politics, Disraeli tried to become a successful writer. His father, Issac D' Israeli, was a Murray author and their families were very friendly.

In 1826 John Murray II and Benjamin Disraeli established a daily newspaper 'The Representative' to rival 'The Times'.

Despite his youth, Benjamin Disraeli persuaded Murray that he was the man to front this venture into the world of newsprint. Disraeli was to be a partner and editor of the newspaper.

From the start the venture was beset with problems and struggled. It was rounded upon by critics and Disraeli failed to invest the money he had pledged.

After only a few months the newspaper had failed and it was wound up with Murray having lost an astronomical £26,000.

The failure and losses caused a great deal of bad feeling between the Murray and Disraeli families. Disraeli later penned a thinly veiled attack on John Murray II in his novel 'Vivian Grey' (1826).