Scientific research to prevent the spread of cholera 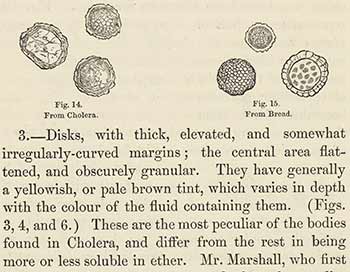 Illustration and description of cholera microbes.

'Report on the nature and import of certain microscopic bodies found in the intestinal discharges of cholera presented to the Cholera Committee of the Royal College of Physicians of London, by their sub-committee, on the 17th October, 1849'.

This report, by the Royal College of Physicians of London in 1849, analyses the microscopic bodies which were discovered in the intestinal discharges of cholera patients.

Without medical knowledge about the cause and transfer of the disease, it was impossible to prevent the spread of cholera.

Cholera outbreaks ripped through Europe in the 19th century, caused by contaminated water and food. Scotland was struck in 1832, with recurrences in 1848 and 1856.

Overcrowded industrial towns and fishing ports were worst affected — in some places, up to half the population perished.