Abolition of the slave trade 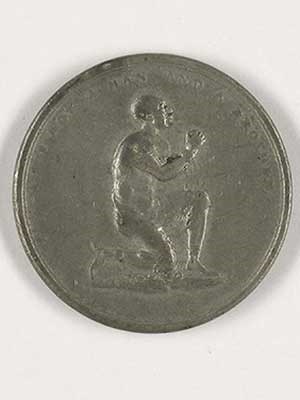 The campaign to abolish the slave trade began in Britain in the late 1780s. The first major public abolitionist efforts reached their peak in 1791-1792.

Publications like pamphlets allowed abolitionists to spread their message to a large audience. Produced at affordable prices, these pamphlets were accessible to everyday readers. Literacy was central to the efforts to abolish the slave trade.

In 1791, the Abolitionist Societies in Glasgow and Edinburgh shared the expense of printing 'An Abstract of the Evidence Delivered Before a Select Committee of the House of Commons'. Circulating this evidence allowed abolitionists to publicise the violence associated with the slave trade.

The 'Abstract' contains the evidence that Hercules Ross gave to the House of Commons. Although he owned an estate in Jamaica, Ross stated his public support for an end to the slave trade.

The National Library holds correspondence and documents related to Ross, including an account book that lists financial transactions with abolitionist politician William Wilberforce (1759-1833).

Scots were active in petitioning against the slave trade. Of the 519 abolitionist petitions received by Parliament in 1792, 185 — or 35 per cent of the total — came from Scotland. (See reference at the end of this section.)

Published in Edinburgh in 1792, 'A Summary View of the Slave Trade' provides sample petitions that people could copy and send to Parliament. Petitioning Parliament allowed people to take part in the political process at a time when the vast majority of Scots did not have the vote.

Abolitionist material was published in cities and towns across Scotland. The abolitionist sermon of Dr Thomas Somerville (1740-1830), 'A Discourse on our Obligation to Thanksgiving, for the Prospect of the Abolition of the African Slave-trade', was published in the Borders town of Kelso in 1792.

This publication, which is in the Library's collections, shows that Scots who lived across the country with no direct connections to the Caribbean were aware of the arguments about the slave trade.

Like pamphlets and books, material objects can also spread political messages. An example of such an object in the Library's collections is an abolitionist coin.

The image on the coin is a kneeling enslaved man in chains. Although this symbol was common at the time the coin was struck, it is important to remember that this view of enslaved people does not tally with their active resistance to enslavement.

Enslaved people's resistance to slavery played an important role in abolition in its own right.

The coin is part of the Sidey family papers collection.

The abolitionist campaigns of the 1780s and 1790s failed. The House of Commons voted against immediate abolition, voting instead for the vaguer idea of abolishing the slave trade gradually. This proposal was made by Henry Dundas, who was Scotland's pre-eminent politician.

By securing a vote for a gradual abolition without a defined end date, Dundas helped to delay the end of Britain's involvement in the Atlantic slave trade. A printed copy of one of Dundas' speeches on the slave trade, which he made in 1796, is available at the National Library.

End of the trade

The campaign to end the slave trade became less prominent in the decades that followed. However, in 1806, the Foreign Slave Trade Act was passed by Parliament. This Act prevented British ships supplying French colonies with enslaved people — a major part of their business.

In 1807, Parliament voted to end Britain's role in the slave trade entirely.

'Struggles for Liberty' – a Library learning resource on the struggles for liberty by African American freedom-fighters in the United States of America, Britain and Ireland in the 19th century.