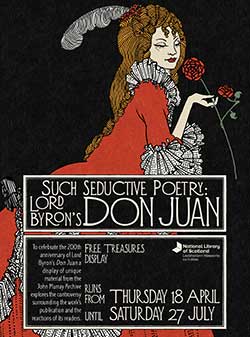 On the 200th anniversary of the publication of Lord Byron's 'Don Juan', this display explored the remarkable story of an epic work.

Items from the John Murray Archive and our rare book collections revealed the controversy around the poem's publication, the reactions of its readers and the relationship between author and publisher. Ran from 18 April to 27 July 2019.

Lord Byron (1788-1824) was one of the most famous authors in Georgian Britain. The popularity of his works rested not only on his poetry, but also his celebrity status.

In 1818 he was living in Italy having fled England amid scandal about his debts and failed marriage. He sent his publisher, John Murray II, the first two instalments — 'cantos' — of 'Don Juan' from Venice.

Written in a mock epic style, the poem contains exotic locations, romance and adventure. However, as it laughed at religion, attacked public figures and made fun of society's values it was sure to be controversial.

Byron's publisher John Murray and his friends admired the work, but concerned about readers' reactions, they suggested cuts and edits. Byron resisted substantial changes, and as a result, cantos I and II were published anonymously in 1819.

The display charts the controversy around the publication of 'Don Juan', and the impact the work had on its readers. Here are just some of the display's highlights:

Items being shown are from the Library's rare book collections and the John Murray Archive.

Throughout the 1820s, the relationship between publisher and poet had become increasingly strained. In 1822, after cantos I-V of 'Don Juan' had appeared in print, Byron broke with Murray, and cantos VI to XVI were published by the radical publisher John Hunt.

The Murray family accrued a large collection of papers relating to Lord Byron and his circle, which now form part of the John Murray Archive. You can explore a digitised copy of the 'Don Juan' manuscript in our digital gallery.

View cantos I, II and V of Byron's epic poem in a digitised version of the manuscript.