Our treasures display offered the chance to see a selection of some delightfully illustrated poetry books in our rare books collections. Ran from Thursday 12 April to Sunday 17 June 2018.

The display uses illustrations of their poems to demonstrate the evolution of 18th-century Scottish book illustration and its establishment as a patriotic visual culture.

Scottish publishers commissioned artists to produce original visual interpretations of some of Scotland's most celebrated literary works. For the first time, editions of works such as Ramsay's 'The Gentle Shepherd', Burns's 'Tam o' Shanter', and Thomson's 'The Seasons' became accompanied by visual representations inspired by their native Scotland. 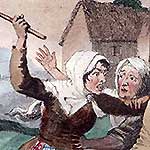 More about illustrating 'The Gentle Shepherd' 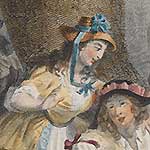 Interpretations of the four seasons in the Scottish landscape brought James Thomson's work to new life.

More about illustrating 'The Seasons' 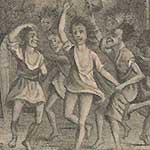 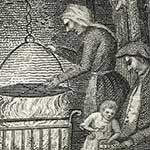 Robert Fergusson's poems were spirited and often humorous, which was reflected in different illustrations of his work. 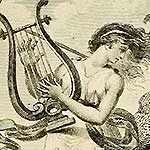 'The Poems of Ossian'

Legendary characters from the Ossian cycle fired the creativity of Scottish book illustrators.

A common theme throughout the illustrations of the different poets' work is the use of landscape. Memorable scenes from many of the works were depicted against the iconic Scottish countryside, reinforcing their national place and significance.

Also on show in our display is a selection of landscape illustrations, demonstrating the development of this art form in the 18th century.