New watercolours were displayed alongside original literary treasures from the Library's collection. Ran from 25 June until 6 September 2015. 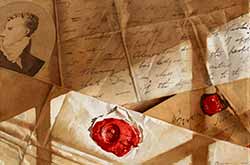 'Murray at his ledger'.
All images © Hugh Buchanan.

The rich literary history of the John Murray Archive came to life through paintings in this treasures display at the National Library of Scotland.

Watercolours were on show alongside the letters, manuscripts and volumes from the Murray publishing archive that inspired them.

Hugh Buchanan is a Scottish artist known for his paintings of historic buildings, libraries and archives.

In 2013, National Library Curator David McClay asked Buchanan to work with the extensive literary treasures of the John Murray Archive to produce a series of paintings.

Over a six-month period, the artist immersed himself in what is one of the largest and most important literary archives in the world.

He explored materials from some of the greatest writers of the 19th to the mid-20th centuries.

Laying out passports, tickets, correspondence and other items, Buchanan arranged compositions from the archive.

The results were 19 carefully composed paintings, inspired and informed by nine authors' works, their lives and their legacies.

A famous traveller of the world, Bird's passports, travel documents and writings about her journeys are a colourful and vibrant addition to the archive.

The archive's Byron collections are the largest in the world. The poet's vibrant correspondence from abroad are an important part of the archive.

'The hound of the Baskervilles' painted by Hugh Buchanan

An esteemed travel writer, Leigh Fermor travelled the world throughout the 20th century, collecting passports, visas and maps which are now part of the archive.

The author of 'The private memoirs and confessions of a justified sinner' corresponded with fellow writers and publishers, including Lord Byron and Sir Walter Scott.

John Murray was Irving's British publisher, bringing 'The legend of Sleepy Hollow' and Rip Van Winkle to readers outside of the author's native United States of America.

Lancaster's daily cartoons were published in the 'Daily Express' newspaper for almost 40 years. Jock Murray published Lancaster's work as a cartoonist and satirist.

The collections reflect Scott's complex relationship with money, along with an insight into his life through letters to friends and business associates.

After being at the Library, 'Hugh Buchanan paints the John Murray Archive' transferred to the John Martin Gallery, 38 Albemarle Street, London — only yards away from number 50, the archive's original home.