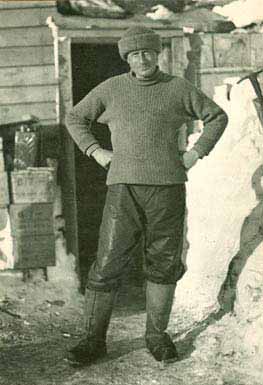 Wilson standing outside the hut.

The son of a prosperous Cheltenham family, Edward Adrian Wilson showed a particular talent from a young age for observing the natural world through his paintings and drawings. While at Cambridge, 'Ted' as he was known to his family and friends continued his keen interest in the natural world. He regularly took long walks collecting specimens and making notes on all the wildlife he found in the area.

Securing a place on the expedition

In 1894 Wilson took a first class honours degree in Natural Science and in October 1895 he started his medical training in London. By September 1900, he held the post of junior house surgeon at Cheltenham Hospital. It was at this time that Wilson was put forward for the British National Antarctic expedition (1901-1904) led by Commander Robert Falcon Scott.

In 1910, following the successful return of the Discovery Expedition, Scott was busy preparing for the upcoming British Antarctic Expedition. He sent Wilson a telegram formally confirming his position as Chief of the Scientific Staff.

The challenge of scientific exploration

In 1895 the International Geographical Congress had passed a resolution urging the scientific exploration of the Antarctic region. This area was known as the 'Terra Australis Incognita', or 'Unknown Southern Land'. At the time, it wasn't certain a continent even existed in the southern polar region. There had merely been a lot of informed speculation it existed. The challenge to explorers and scientists was to see if they could find out, thereby completing the map.

Explorers and scientists were also encouraged to learn to understand the movements of the Southern Magnetic Pole. They were urged to see if they could reveal the secrets of the weather patterns there. The challenge to answer this and other important scientific and geographical questions, some which had major economic consequences, was huge.

The first expeditions to the south polar region were the Belgian (1897-99) and British Southern Cross (1898-1900). They provided much information on the conditions of the Antarctic winter but none of them solved many of the other scientific puzzles that remained. As a result, the British Discovery expedition (1901-1904) became part of a co-ordinated series of international efforts to attempt to find answers.

Achievements of the 'Discovery' Expedition

Under the command of Scott, the 'Discovery' Expedition was to contribute a significant understanding of the Antarctic continent. Five scientists carried out the work:

The expedition carried out groundbreaking meteorological, oceanographic, geological and biological research. They discovered hundreds of new marine species and mapped hundreds of miles of previously unknown coastline, mountain ranges and glaciers. It also reached a record 82º11', the furthest South any expedition had been thus far.

When the research had been analysed on their return, the resulting body of work was massive. It made up 10 heavy volumes subsequently published by the Royal Geographical Society.

Aims of the British Antarctic Expedition

Led once again by Scott, the main objective of the British Antarctic Expedition was to claim the South Pole for Great Britain. However, another principal aim was to build on the scientific achievements of the Discovery expedition. The expedition planned to carry out extensive exploration and scientific experiments along the coast of Victoria Land on the Ross Ice Shelf in:

Appointed to head the scientific staff, Dr Wilson assembled a highly competent group of professionals in all the relevant scientific fields. The expedition set sail from Cardiff on the 'Terra Nova', a Dundee-built whaler on 15 June 1910.

In search of the Emperor penguin egg

Although Wilson himself would eventually be chosen to accompany Scott on the final push for the Pole, there were a number of scientific journeys prior to this.

One of the most famous was the journey in search of the Emperor penguin egg immortalised in Apsley Cherry-Garrard's book 'The worst journey in the world'. Wilson himself described it as the 'the weirdest bird's-nesting expedition that has ever been or ever will be'.

Emperor penguin eggs were particularly sought after by the ornithological scientists of the day. It was thought (incorrectly) that the Emperor penguin was a primitive form of bird. It was widely held at the time (also incorrectly) that the development of the individual (ontogeny) appears to repeat the evolutionary development of the species (phylogeny). It was hoped that the study of the embryo of such a primitive bird would produce the missing evolutionary link between dinosaurs and birds.

If only embryos of this primitive bird could be obtained in an early enough stage of development, then surely one would be found with reptilian scales or going through some other dinosaur-type phase of development. Obtaining the embryo of the Emperor penguin was therefore regarded as a major ornithological prize. A scientific equivalent to obtaining the Pole itself.

The worst journey in the world

Wilson, along with the expedition's assistant zoologist Apsley Cherry Garrard and Royal Marine Lieutenant Henry 'Birdie' Bowers, left their base at Cape Evans on 27 June 1911. Marching out into the winter darkness they headed for Cape Crozier 65 miles away in search of the Emperor penguin eggs.

The average temperature on the journey was -51°C but it fell as low as -60°C. It was so cold their teeth cracked and the pus inside their blistered frostbrite froze. At Cape Crozier they built a rock 'igloo' to serve as a field laboratory to study the penguins.

It was from here that they made their way onto the sea ice and became the first men to witness the mid-winter breeding of the Emperor penguin. They collected five eggs but broke two in the struggle back to the igloo. Shortly after they had secured these three eggs they became trapped by a blizzard. An incredible tale of hardship followed.

After six weeks the three men arrived safely back at Cape Evans at 10pm on 1 August and had to be cut out of their clothing. They had experienced some of the lowest temperatures ever endured by humans.

In the end, the eggs proved to have little scientific use. However, the efforts the men went to and the risks they took under the most extreme circumstances embodied a spirit of heroic scientific investigation that has arguably not been matched since.

There were two geological parties that carried out work as Scott and his companions made final preparations and embarked on the push to the pole. One of these, led by Lieutenant Campbell, had gone northwards to gather geological data and a set of meteorological measurements.

They spent several weeks carrying out this work when the 'Terra Nova' came to collect them. However, the ship was unable to get near the shore due to the ice floes and, having nearly been frozen into the pack ice, the 'Terra Nova' was forced to give up relief efforts.

The six men were forced to spend the winter where they were with only one month's dried food. They managed their rations very strictly and did as well as could be expected under the circumstances. When the Antarctic summer finally returned they began their 230-mile sledging trip back to Cape Evans, arriving back on 7 November 1912, only to discover the news that Scott's party had not returned.

Despite the hardship of many of the scientists and the tragic death of Scott and his companions, the expedition's lasting and tangible legacy was its promotion of Antarctic science. The scientific findings of the expedition alone resulted in twenty-five volumes of published work.

Largely thanks to Geologist Frank Debenham's efforts, the Scott Polar Research Institute was established in Cambridge in 1920. Since then it has been the centre of polar research in Britain.

The expedition's international legacy is also found in the modern framework of the Antarctic Treaty itself. It designates Antarctica as an international continent for science. Today, scientists from all over the world are able to carry out research at the the Scott-Amundsen South Pole Scientific Station. The station is occupied year-round and is located at the geographic South Pole.

Along with the official scientific staff above, other members of the expedition assisted in carrying out research. This included Royal Navy surgeons Dr Edward Atkinson and George Murray Levick. Many of the 'Terra Nova' crew, including First Officer Lieutenant Victor Campbell and many of the able seamen, also assisted. Scott himself was actively involved in some of the scientific work that was carried out.

What impact do you think Scott's last expedition has on scientific research today? Do you think scientific expeditions are as important to our society today as they were to the Edwardians?

What do you think, if anything, 21st-century scientists could learn from their predecessors?

Are you aware of any groundbreaking expeditions or research that are happening now? Do you think they receive as much public support or publicity as these early expeditions did?

How much physical or mental hardship do you think Scientists should be willing to go through in the quest for scientific discovery? Do you think with modern equipment and facilities this is still an issue?