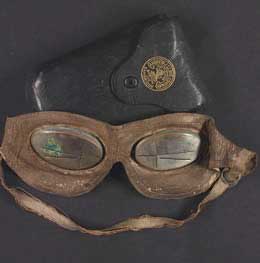 Snow goggles were essential equipment for polar explorers. These goggles belonged to explorer William Laird McKinlay, one of the scientific staff on the disastrous Canadian National Arctic Expedition 1913-1918.

McKinlay told the story of the expedition and his survival for over a year on Wrangel Island in 'The last voyage of the Karluk' published in 1976 when he was 87.

McKinlay's goggles were presented to the National Library of Scotland along with his papers by his family.

Snow goggles were used to protect the eyes and to prevent snow blindness. This was a painful eye condition caused by exposure to sunlight reflected from snow and ice.

'A few men preferred the ordinary wire-gauze type with smoked glass but the drawback to these was their liability to become frosted over. The alternatives were to have a piece of leather with a slit in place of the glass or to have goggles cut from a piece of wood. Personally, I much preferred the latter and in the end invariably used them; mine were very carefully shaped to fit over the nose and eyes, had a considerable cross-shaped aperture, and were blackened outside and in.' 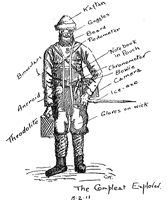 Illustration of a typical
explorer.
View larger image
on Flickr

Weather conditions in Antarctica are the harshest in the world. Early Antarctic explorers wore clothing made of natural materials, such as wool and fur. Before the British Antarctic Expedition took place, Scott organised for some tests to be carried out on different types of material. This was to find out which were most suitable in terms of insulation, waterproofing, and durability.

The Norwegian expedition team wore more fur clothing than the British team. The Norwegians relied heavily on dog sledges, and the fur helped to protect the men from cold whilst sitting on the sledges. Scott however was more reliant on man-hauling. The men would have been too hot whilst undertaking this strenuous physical activity in fur clothing.

The reindeer fur boots made by the Lapps for the British expedition team were called 'finnesko'. They were lined with felt and insulated with hay called 'seannegrass'.

Each member of the expedition team was responsible for caring for and repairing their own items of clothing. They were able to adapt their kit to suit their own individual preferences and needs. The kit would have included:

Modern day explorers and travellers have the benefit of lightweight, synthetic, breathable material. You can find out more about modern Antarctic clothing on the Cool Antarctica website.

Scott and his team used sleeping bags made of reindeer fur. This worked well when the men were at base camp and conditions were dry. However, if the sleeping bags got wet or iced up, they soon became stiff and heavy to carry.

Apsley Cherry-Garrad described the sleeping bags in his book 'The worst journey in the world', first published in 1922:

'When we got into our sleeping-bags, if we were fortunate, we became warm enough during the night to thaw the ice: part remained in our clothes, part passed into the skins of the bags … and soon both were sheets of armour-plate'.

Special snow shoes were made for Scott's team of Siberian ponies. Using a circle of wire for the base, the shoes were created from bamboo, and were fitted to the ponies with leather straps. Enough shoes were transported for all of the ponies. However, before the initial depot laying expedition in 1911, there was not enough time to train the ponies in their use. Scott was not convinced that they would be effective, and only one pair was taken on the journey.

The ponies had great difficulty walking in the snow, and the one available pair of snow shoes proved to be invaluable when tried out on one pony, Weary Willie. Scott regretted having left the other pairs at Cape Evans, as the slow progress of the ponies had an adverse impact on the success of the depot laying expedition. Meares and Wilson were sent back to the base to collect more of the pony snow shoes. Unfortunately by that time, the ice had broken up and it was impossible to retrieve the shoes.

Think about the clothes that you wear, and the fabrics that they're made of. Check the labels and list some of the materials. Which of these fabrics help to keep you dry, cool, or warm? Are these materials natural or synthetic?

Find out more about the weather conditions and terrain in Antarctica. What are some of the challenges of living or visiting the continent? What type of clothing and equipment are essential for survival in this type of climate and environment?

Discuss the potential psychological impact of living in or visiting Antarctica. Consider the climate, and also the amount of daylight during the two seasons — summer and winter.

What animals are indigenous to the region, and how have they adapted to living in such harsh conditions?