One of the witches chasing after Tam.

Robert Burns was born into a small, rural Ayrshire community where traditional culture was integral to the way of life.

He inherited his love of songs, ballads and traditional lore from his mother, Agnes. Although she couldn't write, she would sing to him when he was 'nocht but a bairn on her knee'. Some of these songs and stories had never been written down but were passed on by word of mouth.

Betty Davidson, a relative of Agnes's who lived with the Burns family, was another of Robert's sources of inspiration when he was very young. Superstitious and illiterate, Betty entertained the family with old legends and stories of witches and warlocks.

Burns later recalled her influence in one of his letters written in 1787 to Dr John Moore, a London-based Scottish physician and novelist:

'In my infant and boyish days too, I owed much to an old Maid of my Mother's, remarkable for her ignorance, credulity and superstition. She had, I suppose, the largest collection in the county of tales and songs concerning devils, ghosts, fairies, brownies, witches, warlocks, spunkies, kelpies, elf-candles, dead-lights, wraiths, apparitions, cantraips, giants, inchanted towers, dragons and other trumpery'. 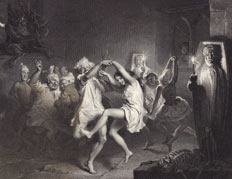 Witch dancing in her 'cutty sark'.

Written in 1790, 'Tam o' Shanter' is an epic poem about a man who discovers a witches' Sabbath and unwisely tries to get a closer look. He can't resist making some remarks about 'the mirth and dancing' he sees. As the music becomes more 'fast and furious', the witches start to undress until they're in their 'sarks' or undergarments.

There is one particular young witch in her 'cutty sark' (a revealing undergarment) who catches Tam's eye. He forgets himself and shouts 'Weel done, cutty sark!', drawing the attention of the witches who realise he has been watching them. Angered, they set off in hot pursuit of Tam. 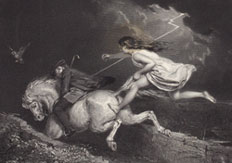 Fortunately for Tam, his mare, Maggie, has more sense than he does and heads towards the bridge over the river, which is only a few hundred yards away.

At this point Burns adds a useful footnote for anyone caught in similar circumstances:

'It is a well-known fact that witches, or any evil spirits, have no power to follow a poor wight any further than the middle of the next running stream.'

The first formal trial and execution of a witch in Ayrshire occurred in 1572. This was followed by a steady stream of accusations, reaching a peak during the 1650s. Official action against witches declined after the 1680s, with the last prosecution taking place in 1727. Despite this, a lingering belief in witches continued among the population throughout the 18th and 19th centuries.

Although those accused of witchcraft came from all sections of society, those engaged in folk healing were perhaps particularly vulnerable to accusation. After all, if these healers or 'cunning folk' had special knowledge to cure ailments, it might also be the case that they could cause harm. Wise women (or men), provided a service to their neighbours using herbal cures and charms. One such person was Bessie Dunlop from North Ayrshire, who known as the 'Witch O' Dalry'.

On 8 November 1576 she was tried at the High Court, accused of sorcery, witchcraft and incantation, dealing with charms, and abusing the people with devilish craft of sorcery. During the trial, Bessie confessed to meeting with a mysterious man called Thomas Reid, who told her that he had died at the Battle of Pinkie. Thomas appears to have been a type of 'spirit guide' instructing Bessie in curing illnesses and recovering stolen property. She was invited by Thomas to deny her religion and to enter the fairy realm, however, she refused to do so.

Despite this refusal, and although Bessie had caused no harm to her neighbours, the court found her guilty and she was sentenced to be executed. It is likely that she would have been strangled before her dead body was burned, as very few witches were burned alive.

Bessie was only one of 3,837 people known to have faced a formal accusation of witchcraft in Scotland. Of the confirmed cases, around 160 involved people from Ayrshire.

You can read another fascinating tale of an alleged Ayrshire witch on the South Ayrshire Library's history blog.