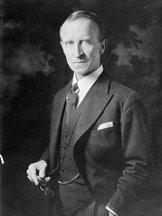 John Buchan was born in Perth in 1875 and was the son of a Free Church of Scotland minister.

As a child, Buchan played on the shore of the Forth and relished his holidays on his relatives' farm at Broughton in the Borders.

It was here that he became familiar with the border rivers, hills, shallow glens and their people. These were to become the staple backdrop to some of his best writing.

Although better known for his tales of intrigue and adventure, 'Witch wood' was Buchan's favourite novel. It combines many of his interests such as landscape, 17th century Calvinism and the fate of Scotland.

'Witch wood' is primarily a historical novel that explores a significant moment in Scottish history, the period of the signing of the National Covenant. It's also a novel that raises questions about human nature, our capacity for self-deception and what happens when we repress certain elements of that nature.

The novel is set in Upper Tweedale during the first half of the 17th century when the Church of Scotland supported the National Covenant and unleashed a wave of cruelty and intolerance in its name.

The Church, or 'Kirk', attempted to stamp out many of the ancient folk traditions and beliefs. These were seen as 'heathen' practices which had no place in a God-fearing society but as Buchan himself wrote:

'Condemning natural pleasures and affections, they drew a dark pall over the old merry Scottish world, the world of the ballads and the songs, of frolics and mummings and 'blithesome bridals, and, since human nature will not be denied, drove men and women to sinister and perverted outlets.' 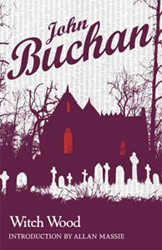 David Sempill is a newly ordained minister who witnesses something that repulses him in the 'black wood'. It is the embodiment of an older conflict between nature and religion. It is symbolised by the dark brooding forest of Melanudrigill Wood, a last remnant of the ancient Caledonian forest. On Beltane, at an ancient stone slab in a clearing, he discovers that:

'The draped altar was hidden by figures — human or infernal — moving round it in a slow dance.'

As he continues to watch, the horrified minister sees:

'the women are half-naked, but the men with strange headpieces like animals. What he had taken for demons from the Pit were masked mortals — one with the snout of a pig, one with a goat's horns, and the piper a gaping black hound … As they passed, the alter was for a moment uncovered, and he saw that food and drink were set on it for some infernal sacrament.'

This event, he discovers, is led by none other than his chief elder, Ephraim Caird.

The 'Black wood' is used as a sacred place by the villagers during Beltane. As Buchan later admitted, it was drawn from:

'the Tweedside parish of my youth at the time when the old wood of Caledon had not wholly disappeared, and when the rigours of the new Calvinism were contending with the ancient rites of Diana'.

David Sempill, although one of the more moderate Kirk ministers, is sickened by the activity he sees going on in the wood. However, he is still just as self-righteous as the other Kirk ministers and elders. His moral and religious beliefs are just as rigid and intolerant and do not allow for other interpretations of what is happening. He believes beyond doubt that he is right, so in many ways he is just as narrow-minded in his morality as his adversaries.

In fact, the alleged devil-worship may actually be less awful than he supposes. It might just be an outlet for repressed instincts which the severe rules of the Kirk condemn. If genuine and legitimate joy is condemned as sinful, then people will naturally carry these activities out in secret.

You can find more books by and about John Buchan by browsing the Library collections. Type 'John Buchan' in the search box above and select 'catalogues and resources'.

Our manuscript collections contain a number of papers from the Buchan family. See the Guide to the Manuscript Collections page for a listing.