Map of Darien by
Herman Moll 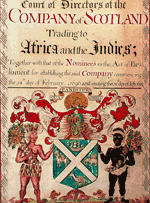 Act founding the
Company of Scotland

Important archive material relating to Scotland and Darien was the focus of this display. Ran from 1 July to 31 August 2011.

This display told the story of the Company of Scotland's fateful colonial expedition to Darien in the 1690s.

Exhibits included the company's private record books, maps, and letters from colonists who travelled from Scotland to the New World.

The display was a joint venture by the National Library of Scotland and The Royal Bank of Scotland.

It followed on from the inclusion in 2010 of the archives of 'The Company of Scotland Trading to Africa and the Indies' in UNESCO's UK Memory of the World register.

Establishing the Company of Scotland

On 26 June 1695 the Scottish Parliament passed an Act establishing the Company of Scotland Trading to Africa and the Indies, a company entirely financed by public subscription.

English investors soon raised their share, but withdrew their money after King William and the English Parliament turned against the venture. However, by August 1696 the Scots had raised £400,000 themselves.

The directors of the Company of Scotland began to lay plans for the colony.

On 14 July 1698 the company's first expedition left the port of Leith bound for what is now Panama. Five ships set sail — 'Caledonia', 'St Andrew', 'Unicorn', 'Dolphin' and 'Endeavour' — with around 1,200 people on board.

The Scots colony at Darien

Map of the Isthmus
of Darien
(New Caledonia)

In November 1698 the colonists reached Darien, which they called 'New Caledonia'. There they erected a settlement and cleared land for growing yams and maize. However, agriculture proved difficult, and the local Indians were unwilling to buy the combs and other trinkets offered by the colonists.

Meanwhile, King William had instructed the English colonies in America not to supply the Scots settlement.

Inadequate provisions and the unfamiliar hot and humid climate soon caused fever to spread, and many settlers died. In July 1699 the colony was abandoned.

The Darien scheme was a complete and disastrous failure. Around one quarter of Scotland’s liquid assets was lost in the venture and some 2,000 people perished.

Blame was directed against England, for withdrawing support at the last minute and for not helping Scots at Darien from its American colonies.

King William and his successor, Queen Anne, pressed for union of the Scottish and English Parliaments. After lengthy negotiations this was finally achieved by the Acts of Union of 1707.

Under the Treaty of Union, Scotland was paid £398,000 (a sum known as 'the Equivalent') in compensation for the Darien losses and to support Scottish industries, which seemed vital to the country’s economic survival.

The last Scottish Parliament met on 25 March 1707 and was not to be re-established in Edinburgh for almost 300 years.

Among collection highlights on display were:

Paterson's proposal
for a colony at
Darien

French map of Darien
and Gulf of Panama
top