Monboddo's comparison of orangutan and human 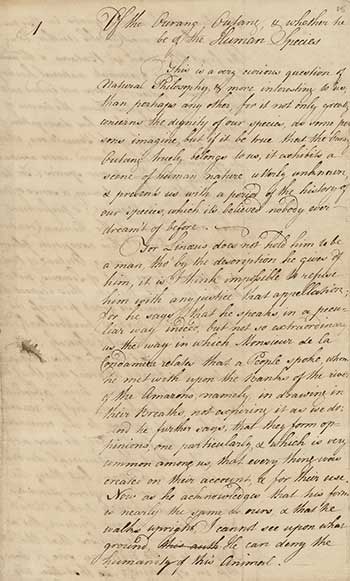 James Burnett, Lord Monboddo (1714-1799) was one of the prominent intellectuals of the Scottish Enlightenment, and one of the founding members of the Select Society.

He was interested in the natural history of humankind, and is considered by some to be one of the early supporters of evolutionary theory.

In this manuscript, Lord Monboddo outlines his belief in the humanity of the Orangutan and their likeness to humans.

These views were ridiculed by other intellectuals including Lord Kames and Samuel Johnson, who put these ideas down to Monboddo's eccentricity.

Read more about the Select Society.

View the entry for James Burnett, Lord Monboddo in a digitised version of the 'Biographical dictionary of eminent Scotsmen'.