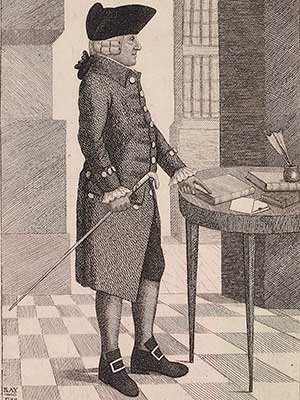 Human morality and ethical behaviour were popular areas for philosophers to question and debate during the Scottish Enlightenment.

New ways of studying ethical behaviour and moral codes of conduct opened up forums for debate, and pushed the boundaries of what was acceptable to some.

Questioning what was right and wrong and good and evil within the complexities of human nature often challenged religious beliefs.

Since many Enlightenment intellectuals were ministers of the Church of Scotland, free expression of these these sorts of ideas led to discussions about  Scripture as the foundation of all morality.

This section includes works on human nature and morality by two 'giants' of the Enlightenment, Adam Smith and David Hume. Visitors can also read letters between philosophers to understand the subjects they discussed. 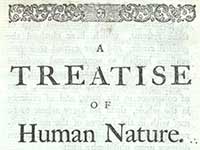 Hume is considered the most significant philosopher of the Scottish Enlightenment, owing partly to his seminal work 'A Treatise of Human Nature'.

More about 'A Treatise of Human Nature'

Hume's letter to a clergyman 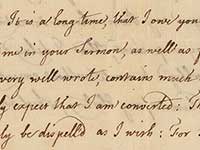 Elements of Hume's moral philosophy were in contrast to the view that Scripture defined moral ethics. Hume engaged in debate with ministers over their different ideas.

Correspondence between Hume and Smith 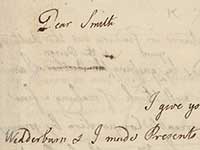 David Hume and Adam Smith were close friends and regularly wrote lively letters to each other. In a letter to Smith in 1759, Hume passes comment on Smith's recent work. 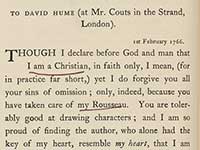 Alison Cockburn knew many of the Enlightenment 'literati' and helped facilitate their social interactions. Her letters and memoir give an insight into her position in Edinburgh society.

Among the items in the 'Moral philosophy and religion' section are: