'The Scotsman': 200 years of a Scottish newspaper

This display told the story of 'The Scotsman' newspaper, using items from the Library's collections and loans from the newspaper's own archive.

'The Scotsman' published its first issue on 25 January 1817. At that time it was just one of many newspapers published on Edinburgh's High Street, then the Fleet Street of Scotland.

It rose to become one of the world's greatest newspapers, but started modestly as a small, almost underground, weekly publication. Across the decades it has grown to become a Scottish liberal institution, championing free trade, parliamentary reform and Scottish devolution.

The National Library of Scotland holds every issue of 'The Scotsman', with a few key ones on show in the display.

Exhibits helped chart stages in the newspaper's development from its modest beginnings to its international presence. For example:

A bold and revolutionary collaboration

From the collaboration of a solicitor and a customs officer, 'The Scotsman' was born.

More about the paper's foundation 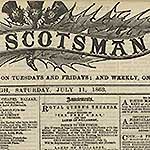 'The Scotsman' was initially published as an eight-page weekly publication. In 1855, it began to be published daily. 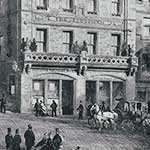 Having outgrown its birthplace at 347 High Street, 'The Scotsman' moved to new custom-built premises on Cockburn Street in the early 1860s. 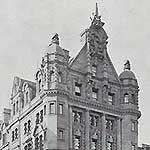 The move to the custom-built premises on Edinburgh's North Bridge in 1905 was an important milestone in the newspaper's history.

A window on the past 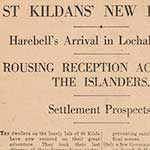 News articles in 'The Scotsman' archive provide a historic record of events such as the evacuation of St Kilda in 1930.

Letters to the Editor 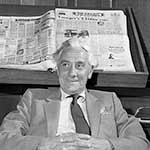 By writing letters to the Editor, readers have been able to air their views and spark debate on pressing issues.

More about letters to the editor 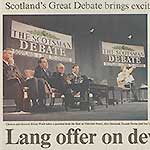 Taking a stance on the key issues affecting Scotland and Scotland's constitution has remained a core part of 'The Scotsman' ethos. 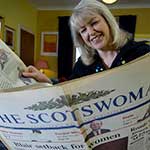 Throughout the 20th century 'The Scotsman' has covered overseas news stories and influenced Scotland's position on global issues such as gender.

Over the past 200 years 'The Scotsman' has reported on many key events. It has followed its founding principle of remaining an independent paper which would publish news and opinions 'without fear or favour'.

The success of 'The Scotsman' can be attributed to its journalism and a willingness to embrace innovation in production and distribution.