Moving from the High Street 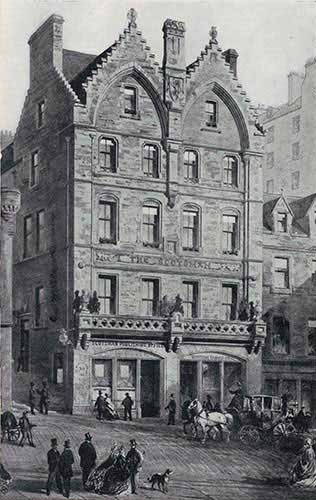 In 1826, 'The Scotsman' moved premises from 347 High Street to 257 High Street, where the Edinburgh City Chambers now stands.

At that time the High Street was regarded as the Fleet Street of Edinburgh.

By the early 1860s, however, it was time for a more significant move – to new, purpose-built premises at 30 Cockburn Street. There 'The Scotsman' masthead was displayed in the building façade.

From Cockburn Street, copies of the newspaper could be sent to Market Street for distribution via vehicle fleets and the railway network at Waverley Station.

The newspaper's owners even struck a deal with railway companies for exclusive carriage of 'The Scotsman', and in March 1872 it began to run a special express train delivering issues to Glasgow.

From the 1860s, 'The Scotsman' also had a London office in Fleet Street, linked to its Edinburgh office by a wire service.