Frederick Douglass escaped from slavery in Maryland, USA to the Northern United States in 1838. He was compelled to 'tell the story of the slave'. He published his first autobiography 'Narrative of the life of Frederick Douglass, An American Slave' in May 1845 in Boston.

The book was an instant bestseller, but it put Douglass at risk as in it he had 'named and shamed' his white slave owners. Fearing for his safety, he fled to Britain and began an abolitionist tour of the country. The first Dublin edition of his book (shown here) was published in September 1845. The frontispiece carried part of a verse written by John Greenleaf Whittier about the Revolutionary War:

'What ho! Our countrymen in chains!
The whip on woman's shrinking flesh!
Our soil yet reddening with the stains
Caught from her scourging, warm and fresh!
What! Mothers from their children riven!
What! God's own image bought and sold!
Americans to market driven,
And bartered as the brute for gold!' 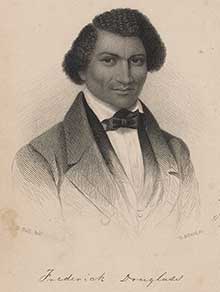 Frederick Douglass portrait
from his 1845 autobiography.

Douglass was a virtuoso of the written word and his personal narrative was a tour de force of political and intellectual power.

He spent a lifetime fighting against dehumanising imagery.

In his opinion, any and all portraits of enslaved people, including his own, should do justice to the tragedies and traumas etched onto the 'face of the fugitive slave'.

He wanted his own portraits to represent the 'inner' as well as the 'outer man'.

For this reason, he did not approve of the portrait of himself in his first autobiography (shown here). He felt that the artist's choice to portray him smiling and dressed ornately was not an accurate reflection of his life. 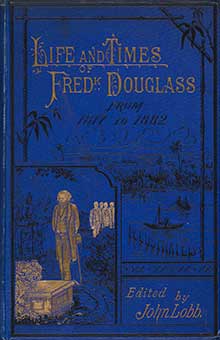 Cover of 1882 edition of 'Life and
Times of Frederick Douglass',
[Library shelfmark: Hall.230.c].

'Narrative of Life' is described as the 'definitive text' within Frederick Douglass's writings. He went on to create numerous works including two further autobiographies as well as speeches, novella, poetry, historical and philosophical essays, and political tracts.

In his later autobiographies, he recorded important activities undertaken in the course of his work. In his third and final autobiography, 'The Life and Times of Frederick Douglass', first published in 1881, he describes a meeting he attended with William Lloyd Garrison and two other white abolitionist campaigners. The meeting took place in Edinburgh in 1846 during his first tour of the cities, towns and villages of Scotland. He later returned in 1859-60.

Discover more about the anti-slavery campaign in Scotland with our resources on Scotland and the slave trade.