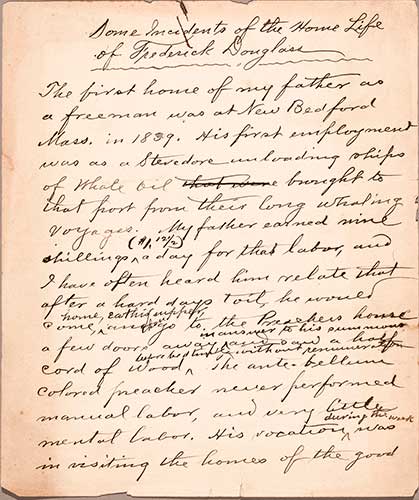 First page of a 19 page manuscript entitled 'Incidents in the home life of Frederick Douglass' written by Charles Remond Douglass, dated 1917. From the Walter O and Linda Evans Collection.

'My fathers [sic] home life during my childhood days was not prolonged. My mother was the head of the house. She was the banker, the baker and general manager of the home. My father was in the field. The home-coming was for a brief season of rest from his labors.'

This manuscript reveals that the whole family played their part to support the abolitionist cause. On page four Charles Remond shares how he and his siblings pulled together to produce the antislavery publication the 'North Star':

As well as its factual content, the manuscript reveals poignant insights into the children's lives as the family fought against slavery, for example, as Charles Remond writes on page eight:

'The taunts of the school children whose parents were pro-slavery made the further attendance at No.13 school of my youngest sister Annie and myself intolerable, so mother took her out of school at the age of 11 and sent her to a private teacher.'