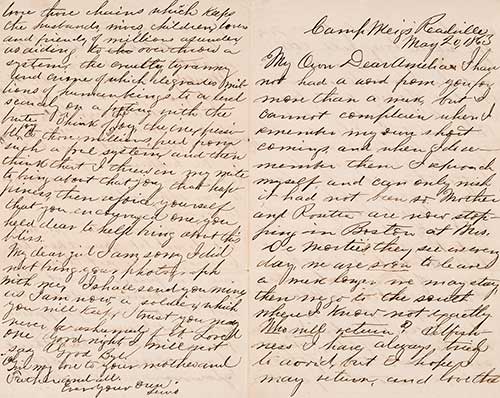 First and last pages of a letter written by Lewis Henry Douglass to Helen Amelia Loguen, dated 20 May 1863. From the Walter O and Linda Evans Collection.

When the American Civil War began in 1861, it was a white man's war: Black soldiers wishing to enlist were turned away. Unrelenting pressure from African American and white radical campaigners, including Frederick Douglass, caused the military to start enlisting Black soldiers in the army and navy.

In 1863, Douglass launched an appeal encouraging 'Men of Color, To Arms!'. He was proud when his eldest son Lewis Henry and his youngest son Charles Remond joined the ranks of over 200,000 Black men serving in the army and navy.

Having enlisted in the 54th Massachusetts Regiment, Lewis Henry was promoted to the rank of Sergeant Major in March 1863. He went to war leaving behind a loved one, Helen Amelia Loguen, a free woman born in Syracuse, New York.

The letter shown here, addressed to 'My Own Dear Amelia', is one of several in the Walter O and Linda Evans Collection written by Lewis Henry from the Camp Meigs training ground in Readville, Massachusetts.

In his letters, Lewis Henry expresses his love for Helen Amelia, his fear of war and yet his resolution to the abolitionist cause.

'My dear girl while I am away, do not fret yourself to death, oh! I beg of you, do not. Remember that if I fall that it is in the cause of humanity, that I am striking a blow for the welfare of the most abused and despised race on the face of the earth, that in the solution of this strife rests the question of our elevation, or our degradation, our happiness or our misery.'

Read more about the the war in our American Civil War Treasures display pages.