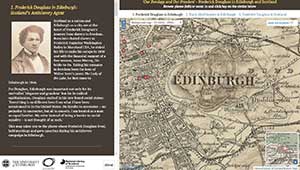 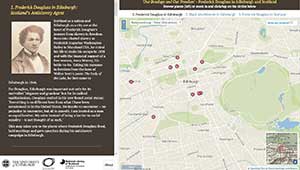 Frederick Douglass was one of many Black abolitionists who came to Scotland in the 19th-century to campaign for social justice and freedom.

Our map collections, together with historic records have been used to create three interactive map viewers pinpointing the places where these campaigners lived, worked and spoke to their audiences.

Ordnance Survey maps from the 1850s-1900s form the background to each map viewer, corresponding to the time when abolitionists were in Scotland. The viewers also include descriptions of events which took place and contemporary photographs and pictures of some of the places and people involved.

Using the different viewers, you can see specific buildings where events occurred, as well as the wider geographic distributions of these places within Edinburgh and Scotland. You can also change the backgrounds of the viewers to see the locations on present-day maps. 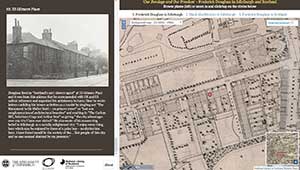 This viewer includes the locations of 10 places where Douglass held meetings, spoke publicly and lived during his antislavery campaign.

Using this viewer you can pinpoint the address in Gilmore Place where Douglass corresponded with radical reformers in Britain and America in his role as 'Scotland's anti-slavery agent'. You can also see where he delivered lectures and speeches to supporters when he came to Edinburgh in May 1846 and January 1860. 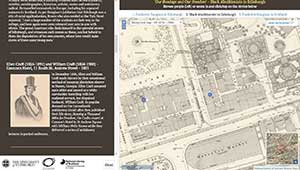 A hotel visited by Ellen and William Craft
shown on the map viewer
of Black abolitionists in Edinburgh.

Details of 12 Edinburgh locations where Black abolitionists gave inspirational talks are included in this map viewer.

Ellen Craft (1826-1891) and her husband William (1824-1900) went to Edinburgh and shared the remarkable story of their escape from slavery with Ellen dressed as a man and William disguised as her enslaved servant. Using this viewer you can see the hotel in St Andrews Square where they stayed during their visit. 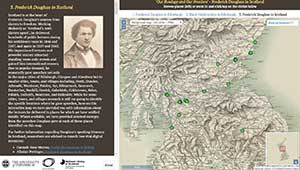 This viewer allows you to trace Frederick Douglass's anti-slavery tours of Scotland between 1846-1847 and 1859-1860. Due to popular demand, he travelled Scotland giving his impassioned lectures in some of the smaller towns and villages, often to standing-room only crowds.

Using this viewer you can see 26 locations visited by Douglass across the country, in towns such as Arbroath, Falkirk, Galashiels, Greenock and Perth. Excerpts from some of the speeches he delivered at these places are also included in the viewer.