'Images of India' was a small display of visually stunning material from the South Asia collections at the National Library of Scotland. From 6 July to 20 August.

Enter the visual world of pre-Partition India as it has been seen over the centuries by both Indians and Scots.

Through the eyes of different religious faiths, through the imagination of artists and through camera lenses, we view scenery, buildings, inhabitants and customs in India, Pakistan and Bangladesh. Here are a few examples:

Created to commemorate the 70th anniversary of Indian independence, this display was also our contribution to the UK-India Year of Culture.

Visitors had a flavour of the Indian sub-continent — from Gujarat in the west to Kolkata in the east, and from art of the early Mughal Empire to letters and books produced as part of the British Raj.

Some of the exhibits reflected the Scottish encounter with India.

This included works produced by Indians brought back by Scots returning from service in India, and some of the early published illustrations produced by Scots who lived there.

Highlights of 'Images of India' included: 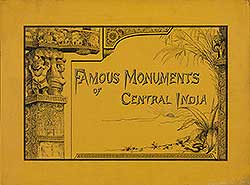 'Famous Monuments of
Central India' is one of the exhibits.

Among other items on show from our large South Asia collections were: